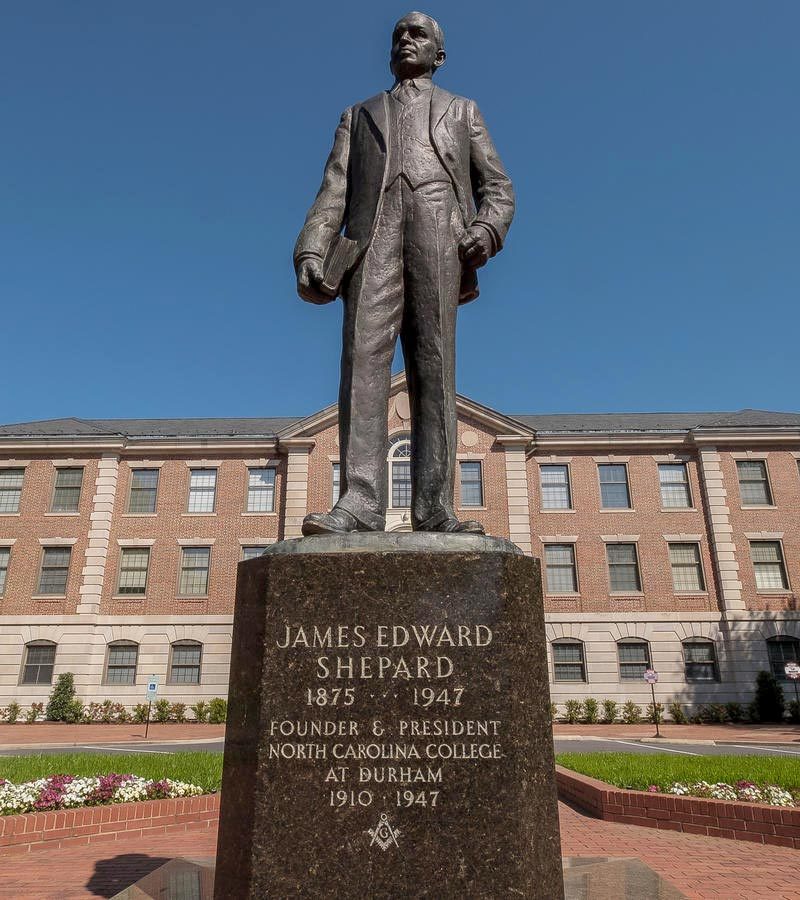 From banking to higher education to the U.S. Department of Energy, Dr. Henry McKoy is always working to use the power of entrepreneurship to improve people’s quality of life.

In July 2022, Henry McKoy, Ph.D, became the inaugural director of the Office of State and Community Energy Programs in the United States Department of Energy. But long before his presidential appointment, he was a banker who believed that businesses could do good; in that capacity, he raised capital on behalf of entrepreneurs who thought about the triple bottom line – profit, people, and the planet as measures of business success. McKoy later served as assistant secretary of the North Carolina Department of Commerce and as director of entrepreneurship in the School of Business at North Carolina Central University (NCCU), where he continues to lead the Entrepreneurship Ecosystem Research Clinic & Lab (EERCL). The NCCU EERCL is a Kauffman Foundation Knowledge Challenge grantee.

We spoke with McKoy about the work of the lab, the impacts of climate change and demographic shifts on entrepreneurial ecosystems, and the imperative to support underrepresented entrepreneurs.

What is the focus of the Entrepreneurship Ecosystem Research Clinic & Lab at NCCU?

Part of the idea was to create a much more diverse pipeline of entrepreneur researchers because which research questions get asked and how they’re answered depends on who’s doing the research. I certainly have a particular perspective because of how I grew up. I grew up very low income, on welfare. Folks around me were poor, so I always had an interest in understanding how you get out of this situation, not only from a family standpoint but from a broader standpoint.

We’re agnostic about student’s majors because most entrepreneurs don’t come from business schools. We opened up [the Entrepreneurship Ecosystem Research Clinic & Lab] to students all across campus and framed it as: Do you have things that you want to change in this world?

The interesting thing about the lab is that we’re agnostic about students’ majors because most entrepreneurs don’t come from business schools. We opened it up to students all across campus and framed it as: Do you have things that you want to change in this world?

Then we give them the tools and skills to think about, in a very critical, research way, how to address these questions. The goal was to make the students assets to work in governments or communities to help those communities consider whether their local ecosystems are equitable.

The lab is set up to take on clients, like local governments, and also doubles as a place where entrepreneurs can get access to student assistance. The idea is to be a model that can be replicated across other historically Black colleges, minority-serving institutions, and beyond. The Kauffman grant really was the foundation for being able to bring that vision to fruition, and that has since spurred additional investment from other funders.

How has the work you’ve done at NCCU informed your approach to your role at the Department of Energy?

The work at NCCU laid a foundation of just really loving being around people who want to make the world a better place. NCCU is a historically Black college, and the majority of the students come from backgrounds with tremendous challenges. They bring the weight of the world with them. That gives me an opportunity to work very closely with students who are passionate about using their talents and their skills to move the world forward. In my current role at the Department of Energy, there’s that same desire. The group I lead is a new office set up to create a bridge with the agency that has historically been largely research and development to something where resources go into communities and get deployed in significant ways to move the needle. I also hope to grow talent from minority-serving institutions – HBCUs, Latino-serving institutions, etc.

Where do you see opportunities for growth in entrepreneurial ecosystems?

Working at a college level, you really understand that this next generation feels there is not a dichotomy between the notion of doing well and doing good. When I talk about why it’s important to have a diverse network of entrepreneurship, I say, it’s because ultimately people still hire from their own networks. So, who owns businesses matters in the big picture. It impacts who gets internships and jobs, what charitable organizations get access to capital, what communities create wealth – it’s all deeply connected. And, it’s not enough just to start businesses in communities. You have to understand why, with every recession, entrepreneurship goes up: people lose their jobs. Even when we’re seeing rises in minority entrepreneurship, we have to be cognizant of what’s driving it.

Beyond that, we also know entrepreneurship for anybody is hard because of the lack of resources and the normal challenges of a marketplace’s ups and downs. We need to think about how businesses are growing and scaling, as well as create institutional anchors for communities. When you look at the history of what made minority communities strong, it’s because they had this mix of small businesses, medium-sized businesses, and anchor institutions that allowed that ecosystem to work.

Do you think the notion of supporting underserved entrepreneurs as a social and economic imperative is truly understood?

We have to get past the notion that somehow any investment in Black and brown businesses is just charity. To get to an equitable world, we have to have an equitable economic foundation.

I don’t think it’s fully understood. I’ve had people ask me, “Why does it matter whether you have Black businesses or not?” People have similar conversations around historically Black colleges, almost like as long as somebody can get served, why does it matter who owns the businesses? But we know that everybody is not being served. We also know there are challenges from a cultural standpoint around opportunities. People sometimes say, “I could see myself in them, so I gave them an opportunity.” In a perfect world you could see yourself in everybody. But we know everyone doesn’t operate like that, so there are situations where minority service institutions offer opportunity others would not.

Diverse ecosystems also play an important role in moving our society forward. For example, a whole lot of people don’t like snakes, but we know snakes play an important role in the ecosystem. And just like snakes or bees, if a species disappears – and I always think about businesses like species – you don’t realize the impact or ramifications that’s going to have. We have to get past the notion that somehow any investment in Black and brown businesses is just charity. To get to an equitable world, we have to have an equitable economic foundation.

As the U.S. population’s demographics continue to shift, what impact do you think that might have on entrepreneurial ecosystems, particularly with regards to equity?

The median wealth for African Americans and Latinos has actually been declining, going toward zero. This corresponds with the historical minority population becoming the majority of the country. If the majority of your society has zero or negative wealth, that’s a problem for everybody. It’s absolutely imperative that we get in our minds the critical nature of creating a diverse and inclusive society, and that means investment, as well. When you look at the gap in access to capital based on demographics you just know that’s not the natural order of things.

We’ve also learned in recent years that neighborhoods are becoming more re-segregated by both race and class in ways we haven’t seen since probably mid-20th century. You end up with these entrepreneur deserts because a lot of these neighborhoods don’t receive the public investment that they should. So, those neighborhoods decline over time. The people who are able to rise up often leave, and that takes not only economic capital but human capital out of the community.

What impact do you think climate change might have on entrepreneurial ecosystems and their ability to serve communities of color?

Historically, the industries and businesses that have been the biggest polluters have been located in areas that are low-income and communities of color. Often these communities are also located in the most vulnerable places – that’s essentially what happened with Hurricane Katrina. There’s a kind of infrastructure problem that the impacts of climate change are hitting these communities in disproportionate ways.

There’s so much opportunity in climate businesses. There are estimates of $23 trillion in economic opportunity in emerging markets. If we’re going to put forth a tremendous amount of money to address climate issues, that opens up the potential for enormous amounts of entrepreneur activity. But if communities haven’t been prepared for that opportunity, then it ends up not following through.

There’s that saying about giving someone a fish. Yes, you have to eat now, and you also need to create the opportunity to learn how to fish. But owning the pond – that is what creates wealth.

Something I spend a lot of time thinking about is how we make investments now that simultaneously address the immediate issue of buffering people against some of the climate impacts, while also building out the entrepreneur infrastructure to allow these communities to have some amount of mobility as part of the economic trajectory. There’s that saying about giving someone a fish. Yes, you have to eat now, and you also need to create the opportunity to learn how to fish. But owning the pond – that is what creates the wealth.

What advice do you have for someone who’s seeking to make changes in their own community to support entrepreneurs?

It’s important to recognize that talent is everywhere. Entrepreneurial success doesn’t have to look like one thing. For a number of years, I did entrepreneur surveys of my students, which Kauffman helped fund the automation of. One of the survey questions was to name a famous entrepreneur in each demographic. When it came to Black men, it was always someone like Michael Jordan, LeBron James, or Jay-Z. When it came to white men, it was always Bill Gates, Elon Musk, Steve Jobs, etc. So, there’s this notion that if you are a white male entrepreneur, then you are in the intelligence space, but to be a successful Black entrepreneur you have to be an entertainer.

I think we need to focus more on introducing young people to innovation. That young Black kid who can run a football or dribble a basketball knows exactly where they can sell that on the marketplace. A little kid who has a new idea for a new technology, not so much. We have to equalize these opportunities and pathways, and that also means putting your money where your mouth is. I try to wake up every day and hopefully do something that moves the needle.

Henry McKoy served as director of entrepreneurship in the School of Business at North Carolina Central University (NCCU), where he continues to lead the Entrepreneurship Ecosystem Research Clinic & Lab (EERCL), a Kauffman Foundation Knowledge Challenge grantee. McKoy was recently appointed inaugural director of the Office of State and Community Energy Programs in the United States Department of Energy where he will continue his work studying the impacts of climate change and demographic shifts on entrepreneurial ecosystems, and the imperative to support underrepresented entrepreneurs.