In preparation for author Andre Perry’s virtual visit to Kansas City for a signature event at the Kansas City Public Library Nov. 12, I invited Perry for a question and answer session. Perry – an educator, journalist, and scholar – took time to talk with me about how devaluation in communities affects our educational outcomes, health care, and infrastructure, the importance of community-driven investment, and reform that is anti-racist.

Join Kauffman and the Kansas City Public Library for “A Community Conversation with Andre Perry,” a virtual event on Thursday, November 12, 2020 at 6:30 p.m.

He underscores that while Black people carry the burden of devaluation and suppression it does not just affect Black communities but limits the entire economy for everyone.

While so many people are clamoring to get “back to normal,” Perry’s book, “Know Your Price: Valuing Black Lives and Property in America’s Black Cities,” demonstrates multiple proof points that the old normal was not working for Black Americans.

Whites: As we think about how to rebuild better, what should we be doing in lieu of trying to get back to normal?

Perry: … We’re in a position now where we should see some of the same remedies we saw in the ‘30s.

Whites: You just told us we’re 100 years behind.

Perry: One hundred years behind, for real. And, we have an opportunity. We’re currently in a recession, similar to what we saw during the depression, certainly similar to the Great Recession. And we have an opportunity to change policy in ways that not only helps people who were punished by past policy, but also lift our economy. Remember, when folks were socially distanced after a couple of weeks? You heard business owners saying, “We need relief from the federal government.” And people, business owners, “The federal government must step up,” only after a couple of weeks. Well, try being socially distanced for generations.

By the way – I always bring this up – schools predominated by people of color, Black, brown, and Asian folks compared to their schools with mainly white students in them get $23 billion less. And that’s because of the way we fund education.

The federal government tries to equalize somewhat the disparities in property taxes in different neighborhoods, but it can’t keep up. At some point, you got to change that system. So, for me, we have an opportunity to move forward in ways that make sense for communities.

Whites: What strategies do you offer scholars or those that work in the economic development realm to bridge the gap between the data that they collect and research, as well as the lived experience, understanding that the industry and most of your peers are majority white?

And you see in education – education is littered with white saviors for that reason. So, for me, it’s about framing the strength, the assets. When I talk about devaluation, it’s to say that these are strong assets, these are things that are worthy of investment. And so, instead of sidestepping the investment and giving it to a middleman, so to speak, why not give the investment to the people who actually need the growth? And again, nothing grows without investment. I don’t care if you’re learning how to cook, community development, businesses, if you don’t have investment, it’s not going to grow. And that’s why you see many of the neighborhoods that are struggling, that are challenges, because they’re just not getting investment. And the more we delay giving folks the investment, the more we delay growth.

A lot of people would say, ‘If we could only fix the schools, everything would be all right.’ And that never really sat well with me.

…kids don’t live in schools – they live in communities – and if we don’t see the entire community, then we’re making a big mistake.

Whites: You use housing devaluation research to demonstrate the systemic wealth stripping leveled against Black people and communities. How is that research also a metaphor for other ways we devalue Black people?

Perry: When I looked at home prices in Black neighborhoods where the share of the Black population is greater than 50%, I compared them to places where the share of the Black population is less than a percent. And most people know that homes in Black neighborhoods are priced a lower … In fact, they’re priced half as much, but they’ll blame it on education and crime and those kinds of things. But those are issues you can control for in a study to get an apple to apple comparisons. And that’s what we did.

Homes in Black neighborhoods are underpriced by 23%, about $48,000 per home cumulatively. That’s $156 billion in lost equity. $156 billion. And I always put this in perspective that $156 billion would have paid for more than 4 million businesses based on the average amount Blacks used to start up their firms. It would have financed more than 8 million four-year degrees, based on the average amount of a four-year public education. It would have replaced the pipes in Flint, Michigan, 3,000 times over. It’s a big number. And so, these are areas where people are doing everything asked of them to afford to achieve the American Dream, but wealth is being stripped from them. On the daily.

I’m here to tell you, it is a myth when people say that the conditions of Black neighborhoods and cities are a direct result of the people in them. You hear all the time, “It all starts at home,” intimating that folks don’t have the proper home training. But from my research, it may start at home, but let’s talk about redlining. Let’s talk about racial wealth – racial covenants that prevented Black people from moving into better neighborhoods. Let’s talk about the lack of investment in Black neighborhoods over time, because those are the things that really cause problems in communities.

Many of our communities have tremendous assets, but their wealth is devalued. Their value is reduced. And I’m very clear about “devalued,” meaning, I want to put action on the suppression of worth and value – that there are policies in place that throttle the growth in neighborhoods and cities.

So, for me, this is not just a Black issue. I talk about Black majority neighborhoods and cities, but there are other people living in those neighborhoods and cities. And, so, when you throttle Black growth, you throttle everyone. Again, that $156 billion that is lost, naturally, that should be expanding the economy. You’re losing talent, you’re losing resources, everybody loses. So, this is not just a Black thing. While certainly Black people are burdened with it, more so than others. This is really limiting the economy overall.

And that’s what I want this research and these conversations to lead to. I want people to connect the dots. Again, we’ve done a lot of work in education together, and certainly we need education reform, but you can’t have education reform without housing reform, without health reform, without transportation. And those are the arguments I’ve been trying to make for years.

Sherman Whites: What are the origins of your book, Know Your Price: Valuing Black Lives and Property in America’s Black Cities?

Andre Perry: Actually, one of the origins of my book actually started in New Orleans where we met, because a lot of people would say, “If we could only fix the schools, everything would be all right.” And that never really sit well with me. Because I started looking at housing and transportation and infrastructure, and all these things were lacking. And all of these things impact the educational outcomes that we see. For me, a lot of this began because I saw a lot of blaming of school districts, of teachers, of students, and an abdication of looking at the issues that surround the school. I used to say all the time, kids don’t live in schools – they live in communities – and if we don’t see the entire community, then we’re making a big mistake.

In addition, a lot of this goes back to my upbringing as a child. I was raised by an older woman in the hood that took in kids from around Pittsburgh. … When I got to college, I read The Moynihan Report, which famously blamed Black marital behaviors for poverty. And I remember going, “Is he talking about my mom? Is he talking about the women that raised me and kept me safe?”

And so, fast forward, I’ve started writing about where to invest in order to see growth. And it’s clear that we do need to invest in schools, but you can’t ignore housing, you can’t ignore transportation, and you can’t ignore Black women. These are assets that are worthy of investment, but they are devalued by policy. So, for me, this book is an exploration into how we devalue the things that we should be investing in.

Whites: You strike an apologetic tone toward Black teachers in one of the chapters of the book. I wouldn’t describe you, however, as an opponent of autonomous schools, yet you are highly critical of the so-called education reform in this country. How should we be using this pandemic to re-imagine school systems?

Perry: New Orleans had taught me the difference between reform … Disguising the same type of racism in reform. Again, I challenge anybody to say I’m against charter schools, or I am against school reform. I’m invested in it. I support change, but change that leads to reduction in Black teachers, change that punishes Black students, it’s the same old racism. And that’s what I’m against. Clearly, I want change. I want to see funding differences. I want to see the structures change, but we have to do it correctly. We need to invest in Black teachers. We need to figure out ways to train, recruit, and maintain Black teachers in schools, not just for the benefit of Black children, but for the benefit of the economy overall and for the benefit of all children.

Right now, [our education curriculum] it’s just woefully insufficient, and it’s producing the kind of racism that we want to scrub.

And, by the way, there’s a lot of controversy around The 1619 Project. We’ve seldom talked about curriculum. Let’s be clear: There’s a whole lot of people who need to know their history. If there’s a real achievement gap, it’s in knowing American history, particularly around slavery, Jim Crow, the systemic racism, white people and Black people … I should say all people really don’t know how their history is impacting wealth and protection today because people really think, “Oh, my hard work and determination gave me the wealth that I have.” No, there were some policies that really supported your grandfather and your great grandfather, that enabled wealth and disabled it on the other side. It wasn’t because of your financial literacy skills. Come on now … and to suggest that Black people are poor because they don’t know how to manage money is ridiculous. It’s just ridiculous. So, if you know your history, you would know that was ridiculous. So, for me, also a part of ed reform is that we have got to look at our history curriculum. Because right now, it’s just woefully insufficient, and it’s producing the kind of racism that we want to scrub.

We really do need to do ed reform, but we need to focus on the structures that reify wealth inequality, and racism into our society.

I say all the time, we might have to close with this: there’s nothing wrong with Black people that ending racism can’t solve.

Andre Perry is a fellow in the Metropolitan Policy Program at Brookings, a scholar-in-residence at American University, and a columnist for the Hechinger Report. 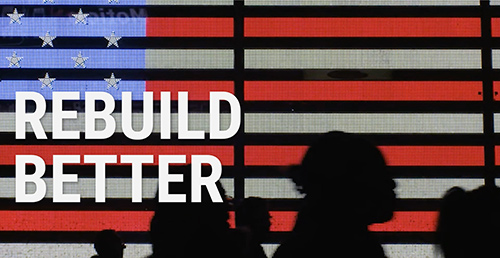 Rebuild better: Success that ensures the opportunity of prosperity for all can’t be achieved within broken systems; true success will only come from systems we rebuild better.