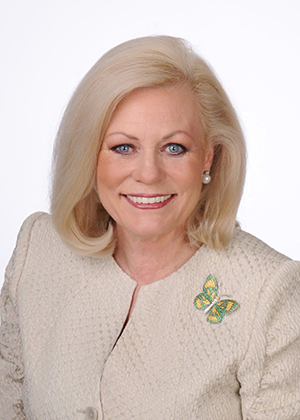 Julia Irene Kauffman is Chairman & Chief Executive Officer of the Muriel McBrien Kauffman Foundation. The Foundation’s mission and vision focus on support of the performing and visual arts in the Greater Kansas City area.

In 1995, Ms. Kauffman was designated Chairman of the Board of the Kauffman Center for the Performing Arts and spearheaded the effort to build the Center in downtown Kansas City. The widely acclaimed Kauffman Center was completed in September 2011. The project brings renewed growth and vitality to the metropolitan performing arts scene with a focus on arts education and wide ranging cultural enrichment.

Recently, Ms. Kauffman was recognized by the Downtown Council of Kansas City with the J. Philip Kirk, Jr. Award for Community Vision and Downtown Stewardship. The UMKC Henry W. Bloch School of Management Council for Entrepreneurship and Innovation named Julia as the 2011 recipient of the Marion and John Kreamer Award for Entrepreneurship in Volunteer Community Service. Julia was named the 2011 Outstanding Kansas Citian by The Native Sons and Daughters of Greater Kansas City. Past honors include the Greater Kansas City Chamber of Commerce ATHENA Award and the William Jewell College William F. Yates Medallion for distinguished service in the arts. The Kansas City Council on Philanthropy recognized Julia as the Philanthropist of the Year in 2007.