“Americans are eternally optimistic… and very forgetful. Historically, the enemy has tended to come from within, and therefore there is a lack of trust and an uber-focus on individualism rather than community good. ‘For we have in this country all the strength and all the vision and all the will we need – if we will only use them.’ (JFK)”

There should be no more excuses for any school to fail our Black and Brown students.

“As a social entrepreneur in the South Bronx, my first thought was, ‘This is going to hurt financially.’ We suffer from the highest asthma rates in New York, are the poorest congressional district, face food insecurity monthly and ailments like diabetes and high blood pressure, are worsened by living in a food desert. Our access to medical care is abysmal. All of this is worsened by over-crowding caused by gentrification, and displacement. This community is 60% Latino and 40% black. Which is probably why we have been overlooked for decades. This has solidified my belief that we need broader policy changes. My hope is that those of us on the front lines will step up and run for office, because when we survive this we will know best how to create a world that won’t let this happen again.“

We must not lose our individual rights as citizens as guaranteed by the Constitution.

“In the future, public health will have greater priority. Health, well-being, and individual responsibility will be major community concerns. We must not, however, lose our individual rights as citizens as guaranteed by the Constitution. Our freedoms and free enterprise have produced the greatest good for the greatest number in the history of the world. We must guard our freedom and economic system if we are to continue to be the beacon of hope and the shining city on the hill, for the world.”

“Many of our institutions have been caught sleeping. We should have changed these models 30-40 years ago when we entered into the digital age. Now, we are stuck with citizens who do not have access to broadband and a lack of leadership to get us into this age. We need Internet access to be a public utility and a universal basic income. I am thinking more globally and feeling that the U.S. will be further down the ranks educationally and economically.”

What do we choose to leave behind? What do we take with us or create anew? There has never been a better ‘reset’ time (at least in most of our lifetimes) to consider such questions.

“There are lessons, too, to be learned about our supply chain and how the disappearance of small businesses in some sectors (meat processing, for example) has left both suppliers and customers vulnerable when large plants are shuttered. My fear is that we will head the other direction, instead of recognizing the need to nurture a growing small business sector. Small businesses lack the resources to weather a prolonged disruption.“

There’s opportunity right now to cross traditional boundaries and build trust and partnerships that will make us more resilient.

“One of the silver linings in this crisis is that many newly formed partnerships and shifts have occurred in various organizations (businesses, nonprofits, government, and philanthropy) that recognize a new reality. Having a commonality of purpose in taking on a common ‘enemy’ gives us a chance to be more united across traditional boundaries and build trust and partnerships that will make us more resilient in the long run.”

The biggest impact has been the realization of our global interdependence, both from a health and an economic standpoint.

We do not live and work in isolation.

“The social trend I believe will come about is on the mega-corporate campuses where thousands gather to work. It’s been demonstrated for a long time [that] working virtually is just as effective as driving to work – in fact, it’s more productive eliminating drive time, drive risk, and expense. We need a regionally-balanced workforce. Too many high-tech jobs are clustered on both coasts, which is a risk in itself.”

“Young baby boomers are re-looking at putting their parents in senior living facilities, and they are bringing their millennial gig economy children back home, because [millennials] can’t afford to live in this economy. I think American society may revert to pre-Industrial Age communal family living with multiple generations living in the same household.”

Schools will not be able to go back to the way things were.

“Teachers and students have shown resilience and resolve in how lessons are disseminated through the use of technology with rigor and grace. Teachers, where I work, have created flipped classrooms, blended-learning lessons, and have actively worked with students via Zoom, YouTube, Google Classrooms, and email. And we are constantly working on ways to reach out to more [students]. Schools will not be able to go back to the way things were. I personally look forward to working with technologically capable teachers who are able to reach all types of learners. In other words, there should be no more excuses for any school to fail our Black and Brown students.“

“This is a brutal thing to endure, but I think history will show that there was a shedding of a skin that occurred here, and that we’ll be a more aware society in the future as a result. Arundhati Roy calls the pandemic a portal… I like that framing. What do we choose to leave behind? What do we take with us or create anew? There has never been a better ‘reset’ time (at least in most of our lifetimes) to consider such questions.”

Unless and until we educate, motivate, and stimulate white society to give greater priority to our Most Vulnerable Populations, this fastest growing segment of our society will become an inadvertent economic anchor weighing down the overall capacity of the whole nation’s economic growth efforts.

“In the pre-pandemic era, the nation was divided by 20th century segregationist policies and practices that protected white supremacy and oppressed non-whites.

“Schools were segregated with low-quality education targeting high-poverty kids in our Most Vulnerable Populations (MVP).

“In the post-pandemic era, whites will focus on recovering “their” economy, leaving the MVP even worse off than they were for the past 60 years (which was a declining trajectory of economic conditions).

“MVP are facing a scary future wherein their disparate measurable conditions will reveal the priority that white Americans have always had since the inception of this nation. Every attempt to shift the priority from white to uplifting people of color who comprise the Most Vulnerable Populations has been met with violent backlash.

“In the post-pandemic era, everything will focus on benefiting white society. People of color and our kids will have to find innovative ways of accessing opportunities and pathways to prosperity. These will be limited in scope and capacity.

“Unless and until we educate, motivate, and stimulate white society to give greater priority to uplifting the MVP, this fastest growing segment of our society will become an inadvertent economic anchor weighing down the overall capacity of the whole nation’s economic growth efforts. The MVP must improve their productivity for America to sustain her global competitiveness. The MVP cannot improve their productivity when they will lose half of their sole proprietors (3 million) and half of their employer firms (230k) with no strategic plan to recover, and no long-term committed investments from government, foundations and public-private partners. The landscape of CDFIs and other non-traditional financing sources are insufficient to move the economic needles of progress among the MVP without a national strategy and committed effort to measurable growth.” 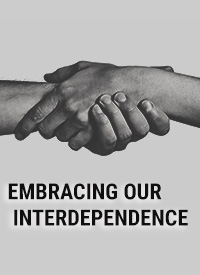 Embracing Our Interdependence: In a country born out of the notion of individualism, our greatest strength can actually be our interdependence. We can remain strong individuals while also building stronger systems, and a stronger nation.