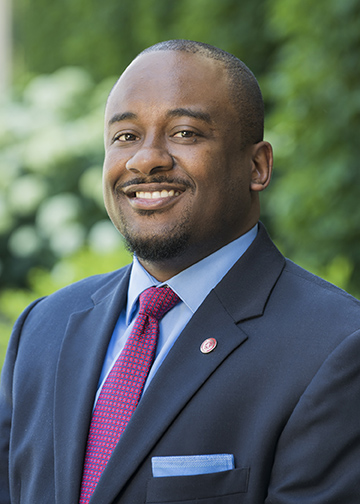 Eric Wilkinson is the director of operations manager of Kauffman Scholars, Inc. (KSI), where he oversees administrative support for all KSI programs and provides day-to-day management and facilitation of the KSI scholarship. During his time with KSI, Wilkinson has served in various roles ranging from an entry-level student adviser to his current role as one of the leaders of the organization.

Prior to returning to Kansas City to join KSI in 2009, Wilkinson worked for Pittsburg State University (PSU), as an assistant director for both the Office of Admission and the Office of Student Diversity. Additionally at PSU, he served as an academic adviser, faculty/staff adviser to multiple student organizations, and was inducted into the inaugural class of Leadership PSU, a leadership development program for up-and-coming higher education professionals.

Wilkinson volunteers his time at several organizations in the metro area, including Big Brothers Big Sisters of Kansas City, where he serves on the Diversity Task Force/Board. He also stays active with his alma mater, currently serving on the PSU Alumni Board. Wilkinson earned his Bachelor of Business Administration in management from PSU.